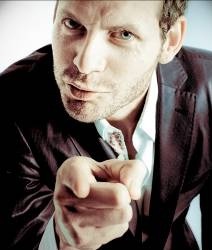 The AfricaCom Awards team is delighted to announce that 2012’s event will be hosted by top South African comedian Nik Rabinowitz!

Nik was raised on the mean, green streets of Constantia, Cape Town, a world of ride-bys (on horseback), piano lessons, and unrelenting love and financial support from family members. He grew up on a farm, climbing trees and commentating on his own rugby games in at least three of South Africa’s eleven official languages.

After somehow graduating from UCT with a Business Degree and a large afro, he took off with a band of traveling actors and a herd of donkeys before discovering stand-up comedy one spring afternoon in 2001. Ten years later, he was nominated (by his peers) as one of the top 4 stand-up comedians in South Africa at the SA Comics Choice Awards.

In 2010 he starred in Bafunny Bafunny, touring SA and the UK (where they sold out The Royal Albert Hall). He subsequently appeared on the UK's most popular comedy show, BBC 2's Mock the Week. Nik has also produced and performed six one man shows including the latest sell-out, You Can't Be Serious.

With Nik’s presence at the AfricaCom Awards 2012, it’s set to be an even more star-studded evening!
Posted by Natalie Bursk at 14:56 No comments: